"You Can Be Their Salesforce Hero..." 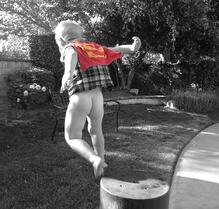 Technology is frustrating and intimidating, until somebody shows us the way.

I was a hero

During a recent visit with my mom over the holidays, I noticed she was trying to share her photos with the family. She had been trying to figure out why she couldn't see her photos that were uploaded from iPhoto to Flickr.

I learned that she had spent a few hours on this problem over the course of a couple weeks - one day she would try for 15 or 20 minutes, couldn't figure it out, and would then try again the next day or the day after.

In a matter of minutes, I saw the problem - she had two Flickr accounts. She would log in to one account, but was sending her iPhoto images to another account. Turns out her photos were loading, she just couldn't see them. We added the correct account to iPhoto and solved the problem.

She spent hours on a problem that really should have only taken a few minutes. She ran into a road block and couldn't get past it until somebody showed her how - I was a hero, and it felt pretty good.

I was a victim

I am in charge of reconciling accounts in Xero. I basically know how to do the job, except for when it comes to reconciling PayPal transactions. I would dread this task not because Xero is a bad application or the process is difficult - I just didn't understand what to do.

The other day, my boss (who is my brother) told me that I had been reconciling these transactions incorrectly during the month of December. I brought up the instructions and pointed out my confusion in following them. So he took two screenshots of what I was supposed to do, added them to the instructions, and everything became clear.

What I dreaded doing because I didn't know the "how," is no longer a stressful endeavor because the steps are laid out for me. I was a victim of technology, and I know how great it feels to get some help.

You can be a hero

You probably have end users in your organization who hate using Salesforce because they have wasted hours doing something that should only take minutes. Or they dread having to login because everything is a mystery and they stress about not knowing how to execute operations correctly.

Things that are difficult and intimidating for your Salesforce users are easy for you, and you have the opportunity to make their lives easier by showing them the way and removing road blocks. You can be their hero - and while you may not take their breath away, you'll feel pretty good.

photo courtesy of my nephew in his front yard